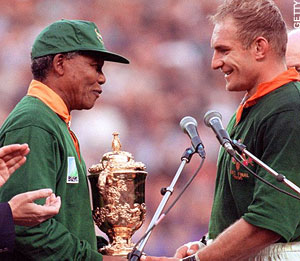 Matthew, Mark and Luke tell the actual story of how Jesus was born. You may be familiar with it… angels, shepherds, a donkey, a baby born in a manger. But what John does in his account of Jesus’ life is start his story with the meaning and significance of what is happening. The Word, that is God it says, has become human and has dwelt amongst us. It says we have seen his glory, and it is full of grace and truth!

The world is currently mourning the loss of another truly great person, former President of South Africa, Nelson Mandela. A couple of year ago a great movie came out called Invictus. Have you seen it? It had all the elements of a great film; intriguing politics, a sporting victory, and no soppy love story! The film tells the story around the 1995 Rugby World Cup and particularly how Nelson Mandela and Francois Pinaar – the white Springbok Rugby Captain united the nation.

You may remember the event – at the Rugby World Cup in 1995 Nelson Mandela comes out to give the Springboks the trophy and he is wearing the no.6 Springbok jersey – that of Francois Pinaar. The film, like John’s Gospel tells the story of the significance of that moment. The significance was that at the time the country was deeply broken and divided, half a century of apartheid rule had deeply scarred the nation.

And now, Nelson Mandela who had been in prison had emerged to become the first black South African President. The country however was still on a knife’s edge. The threat of violence and revenge hung over the nation. In the middle of this, rugby which was the sport associated with white dominance was hosting its World Cup in South Africa. Aware that the country needed healing and reconciliation, Mandela reached out to a divided country and in that incredible moment of forgiveness and reconciliation, he entered the stadium in a green Springbok jersey.

He wears the jersey that symbolises division and brokenness and turns it into an image of peace.

That is what grace does… Mandela who could have sought revenge instead enters the stadium and offers reconciliation! Grace is an amazing thing! It can change the world…

The story of Christmas is somewhat similar. Like Mandela whose act of grace changed South Africa, at Christmas we celebrate the living God, who for the sake of reconciliation, took on flesh and dwelt amongst us. Like Mandela who instead of revenge brought peace, God comes not to punish you but to love you and offer grace!

When God entered the stadium, that is, his world, the affect is even more remarkable. Like Mandela entering the stadium, God enters the world. As it says in John 1, the Word became flesh and made his dwelling among us. It says Jesus’ coming is like light shining in the darkness.

You know there is darkness in this world, with trouble and strife everywhere… even in our own lives! But as you get to know Jesus, which I hope you will, you will behold light, behold glory. It is the story of the living God, humbly dwelling amongst us, showing us grace and truth. My guess is you need a bit more of this in your life!

At Christmas and beyond we encounter this Jesus hanging out with the broken and forgotten in our world and showing compassion and mercy to the least amongst us. You encounter the power of God as he heals the sick, releases the captives and walks the stormy seas. This Jesus will teach you to love your neighbors and forgive those who sin against you. And in the greatest act of love, the one who enters this stadium called earth will die for us, winning us reconciliation with God by offering his life in our place!

It is quite a story… and it has incredible significance for you and the entire world. As we begin to follow Jesus, our lives are changed by grace.

At the end of the game when the Springboks had won, the entire team, led by their white captain fall to their knees to pray and give thanks to God. In one sense it is a sacred moment. Not to take the analogy too far, but they have beaten the All Blacks… dispelling darkness? OK too far… And there is Mandela, in affect reconciling the nation! Offering peace.

God having shown us what he is like in Jesus Christ has the same affect. All around the world as people get to know the grace, love and reconciliation won by Christ the King, they fall down on their knees… In that moment of thanksgiving, something remarkable can begin to happen. We get called children of God and begin to walk in his light.

What a great time of year! Friends, family, free time…  but in the midst of this let me ask you this. Have you responded to the grace and reconciliation offered by Jesus? This is the living God, the light of the world who stepped down into darkness who calls us to follow him…