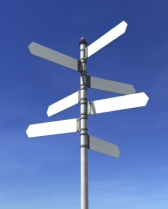 Being in the religion section of Manly Library is as good a place as any to realise that you no longer live in Christendom (that mystical place when everyone was a Christian and the church held the dominant position in all areas of society). There are books on every imaginable spirituality and religion. Indeed the lady standing next to me in the religion section smelt like a walking incense stick…

With the release of the latest census data it is fair to say that Australia is becoming simultaneously a more diverse religious place and a less religious place. So what then is the fate of Christianity in Australian society? Is it destined to be one faith among many? Perhaps it will be reduced to a few useful spiritual slogans for the spiritually enlightened types? Or could we one day see a resurgence of Christian belief and impact by a church stripped of some of the unhelpful institutional baggage.

Jesus claimed to be the way, the truth and the life, the only path to God. He claimed if you want to know God, to get to know him. I imagine to the average Australian who knows believers from different faiths and non believers alike, this must seem a bit narrow and outdated.

As Leslie Newbigin (a Bishop in the CofE last century) said; “How is it possible that the gospel should be credible, that people should come to believe that the power which has the last word in human affairs is represented by a man hanging on a cross?” If we believe the Jesus story is true, if we believe that it is unique and we believe it is powerful – then how will that come to bear on a society that is increasingly spiritual but not religious? Searching for meaning but not in the church? Open minded but thoroughly skeptical?

Newbigin believed that the answer was the church – Christian communities living out the gospel and making it credible and powerful through their belief and practices. In other words, it becomes a powerful force once again when people can see it in action.

Talking about the early church Jim Wallis from Sojourners says;

“The message of the Kingdom became more than an idea. A new human society had sprung up, and it looked a lot like the new order to which the evangelists pointed. Here love was given daily expression; reconciliation was actually occurring. People were no longer divided into Jew and Gentile, slave and free, male and female. In this community the weak were protected, the stranger welcomed. People were healed and the poor and dispossessed were cared for and found justice. Everything was shared and joy abounded, and ordinary lives were filled with praise. Something was happening among the Christians that no one could deny.”

I am hopeful for the future of Christian faith in our country because like many I believe it is powerful to save and to transform. At Manly Life my hope is that people will see a community that bears witness to the truth and power of the Gospel by the way it follows Jesus and does life together. There is no more powerful a force than a community that loves one another and its neighbours around it. When we gather we want to share stories of grace and hospitality, to pray expectantly and see God move whether through signs and wonders, addictions broken or forgiveness given.  This is surely the best signpost to the God we claim to know and serve.