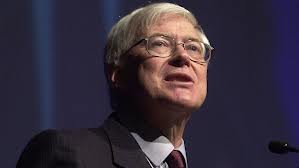 I felt for the Archbishop of Sydney, Peter Jensen, last night on the ABC television show Q&A. While I am sure he would have loved to have spoken more about the loving, grace filled God of the scriptures, he was instead harassed and mocked by a loud atheist fellow panelist and many members of the audience. When it comes to public engagement with culture these days, Christians seem to be caught in the trap of holding unfashionable social views around sexuality and are seen as generally intolerant.

On both sides of the debate there is a tendency to demonize, name call and mock the opposition. Neither Christians nor secularists do themselves any favors when they fall into this game. Well done to the Archbishop for trying to remain gracious and serious on the issues.

The big point of course is that in the midst of such slanging matches the Gospel is distorted and secondary issues become the headlines. When I read through a Gospel like Luke all I see is good news for the poor, broken, sick, sinful and isolated. Would the world really be a better place without the local work of churches, organizations like Compassion, the Salvo’s and Mission Australia? In other words, the gap between what is debated and reality of the Gospels is frankly sad.

Research seems to suggest that people like the Christians they know, but not the institution of the church. Of course it is not a PR war, but if it was the church is receiving a hiding at the moment. This is sad because although the church is a flawed organization and has many scars in its history, it is still the vessel of Jesus to the world. In other words it carries the hope of the world to a still broken society and culture. Lives change when the Gospel is proclaimed and lived out – we see this in our churches all the time!

The age of Christendom is well and truly over. The privileged place of respect and influence for the church is declining fast. Into this world, Leslie Newbigin is right that the only hope of the Gospel is for local communities of believers to be living the Gospel out as prophetic acts of the story that changes the world. Love one another, do not judge, act justly, forgive your enemies, blessed are the peacemakers, the merciful, the poor in Spirit. It is all still good news.

2 thoughts on “The Rantings and Ravings of Atheists (and Christians)”